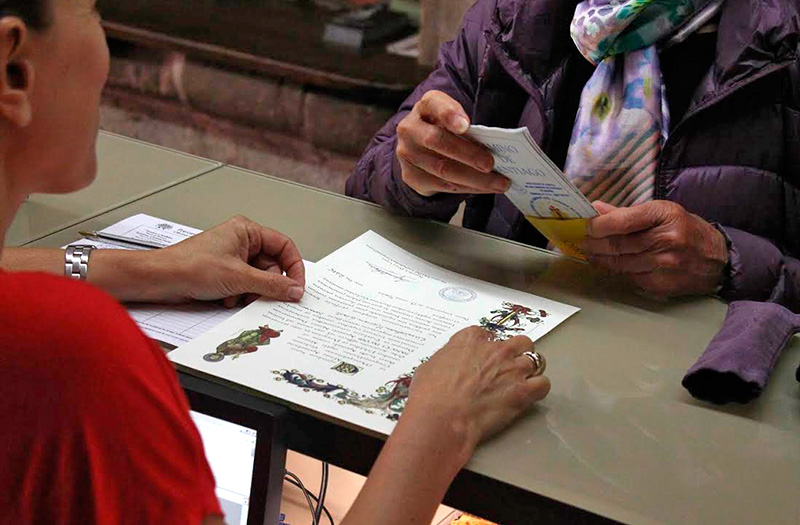 Historically the Compostela was a very valuable document, the so-called Cartas Probatorias, (probatory letters) letters gained as a means of penance. Pilgrims could return home, show their certificate, and be relieved of their sins. It was also believed to be a document that would get them through the gates of Heaven proof of their virtuous life, as you can imagine there was quite a nice little business created for false Compostela Documents!

The current certificate was created in the 9th and 10th centuries when the pilgrimage to the tomb of Saint James the Apostle was given official status. The certificate is issued by the Catholic Church at the Pilgrim’s Office located in Santiago. From the official point of view reaching the Tomb of St James in Santiago is the purpose of the Pilgrimage.

How to Achieve your Compostela today:

Today you must walk a minimum of 100 km and 200 km on a bike or horseback finishing in Santiago.

During your Camino, you carry a Pilgrims Credential/Passport and have it stamped daily to prove that you were not using transport and for the last 100 km, you must have it stamped twice per day. You can get stamps from many different places Hotels, Hostels, Albergues, post office, Churches and even some cafes!

There is a Pilgrims Mass held every day at Midday, the records of those that have arrived and received their certificate will be delivered to the officials and an announcement will be made during the mass of the countries and how many people from that country arrived that day. If you were not recorded before midday you will be included in the list for the following day.

It works in the same way as the Compostela: you need to get two stamps per day as evidence of your journey along each stage. Then the Finisterre Hostel or Muxía Tourist Office can issue you with this certificate.