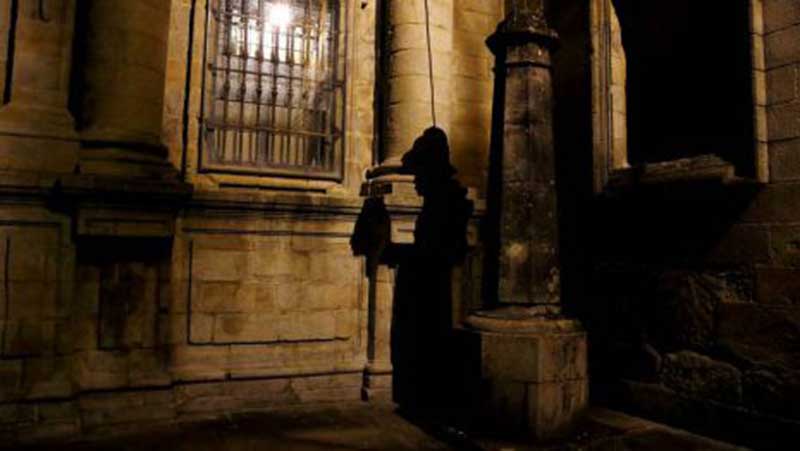 Have you heard of the Shadow Pilgrim, known also as Santiago’s Ghost?

In Praza da Quintana at nightfall, when the lights of the square are turned on, the shadow of a pilgrim is projected onto the wall of the Cathedral de Santiago. Local legend tells a tale of love and loss. It is said that a priest fell in love with a nun residing in the convent of San Paio, across the plaza.

Secretly they would meet each night

Hiding in a passage under the Quintana stairs that joins the convent to the cathedral. One night when he was tired of lying and sneaking around he asked his love to run away with him so they could live and love in freedom. A promise was made to meet in the plaza the following night

Dressed as a pilgrim to conceal his identity he waited in the shadows, but she never came. Every night since then he returns, still in love and longing to see her. Forbidden love and anguish have him eternally waiting for his love.

How to find him in Santiago de Compostela

Look for the deep corner between the base of the clock tower and the Royal Door. There you will see his shadow, behind a low fence next to the lighting pillar. Take a moment to imagine the time…